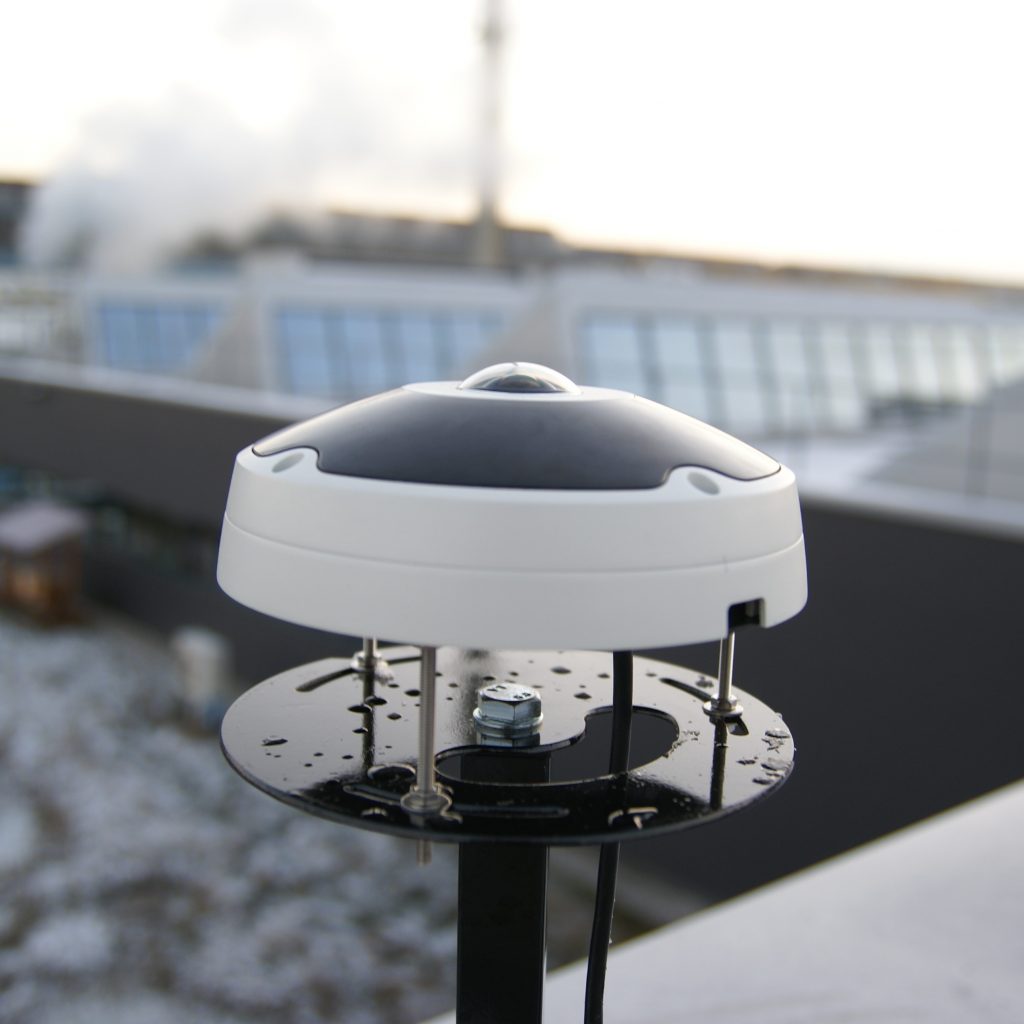 We have assembled and put into operation a functional sample of equipment for interval imaging of the day sky (image collection, pre-processing and sending to a computer server) – sky scanners. The device consists of an IP camera, Rapberry Pi and aggregation software.

The facility is located and is in operation on the south roof of UCEEB CTU, Třinecká 1024, Buštěhrad.

It consists of a device consisting of three parts: a panoramic IP camera, a tripod and a Raspberry Pi device with operating software. The tripod consists of a modified concrete tile weighing about 20 kg, ensuring sufficient stability. The selected IP camera requires a POE injector for its power supply, while the Raspberry Pi requires a power adapter. The IP camera is resistant to weather conditions, the power adapter is stored in a covered distribution box.

Sky Imager is a stand-alone device for acquiring images of the sky, on the basis of which a short-term exposure prediction is calculated on a remote computer server.

The goal of the device is to acquire images of the sky at predefined intervals and time spans. These images are pre-processed mainly by applying a predefined mask, which filters out unwanted (typically static) objects from the image.

The images are then sent to a computer server for further processing via a secure interface. If the image cannot be sent, it is stored in the device’s external memory for later transmission. This greatly increases the resistance of scanning to Internet connection outages. This ensures long-term continuous sensing, which is important for the development and testing of prediction algorithms.

Detailed information about the software, including the source code and its settings, can be found here: https://github.com/UCEEB/Sky-Imager-Aggregator.

The device can cope with a short-term loss of Internet connection depending on the size of the external memory of the Raspberry Pi device, which ensures continuous scanning. Just to give you an idea, in the current setup, the device is able to bridge a 2-day internet connection outage.

The sky imaging system physically consists of three parts – an imaging camera, an image aggregation device and a computer server.